After being elected the Mayor of Lotuvira, Berendir has since established the promised hunting reserves throughout Finaru, boosted Lotuvira”s global trade and established a lasting peace in Finaru with IteoR.

The Mayor is pleased too to report a minimum of Southern Finaru casualties in recent wars waged in Sargaso and Venuso, promising to value the lives of his citizens above foreign conflicts that do not directly impact their way of life.

Berendir understood the ramifications if he failed. It wasn’t simply his reputation at stake; one he had spent 212 years forging, but that of all his kin. Racism was prevalent in the land, and to falter as a dwarf was to condemn all stout folk in the eyes of prejudice humans. 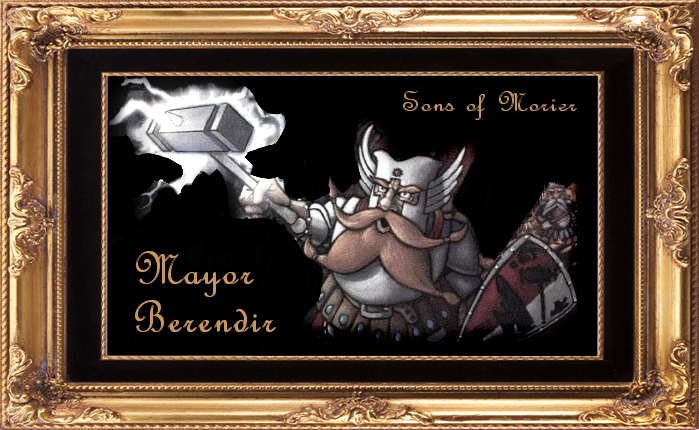 Berendir?s campaign focuses on these three major themes that will work in concert to strengthen the defense, economy, and quality of life throughout Finaru and beyond.&

Following the two devastating conflicts in Finaru: Exodia?s Reign and the war against Zarukai and Litchlore, the land has been left in turmoil, the majority of its goodly citizens left without a job or any honest work to speak of. Berendir?s a working dwarf, he understands the need to earn your own wages, to support your family and to feel proud about what you do.

Your future Mayor plans to fight the war against poverty and unemployment on two fronts. The first is to strengthen trade with the distant cities of Moradil and Arydus, a project that will require strength of arm, and both a great deal of money and patience. Arydus, the capital city of Venuso, has been left in ruins. The wealthy dwarven clan the Sons of Moria, Berendir being their Head Beard, have volunteered to lead the reconstruction efforts on the port city, to get it back up and trading.

The second part of Berendir?s economic boost plan lends itself too to home defense, and purging the lands of Finaru of unwanted vermin. The scholars and lore masters of the Sons of Moria have researched the lands of Finaru to discover the most highly populated regions of creatures such as orcs, trolls, and other more rare and dangerous beasts that do not belong, and threaten to create an unsafe and inhospitable environment for the good peoples of our fair country.

The plan calls for Hunting Reserves in the regions where these beasts and creatures find their homes.

The Reserves will be clearly outlined on a map distributed by the Sons of Moria and Berendir?s own campaign team. To further boost the economy the dwarves will be erecting a Hunters? Lodge, modeled after the first, due South of Lotuvira along the coast of South-West Finaru, which was a monumental success to draw new funds into the land and warriors to cleanse the foul remnants of Exodia?s Reign.

These new Hunters? Lodges will provide jobs to men and woman to keep up the establishment, and a place for the hunters and adventurers to spend the night and share a fine brew with their hearty companions. Each Lodge will have a resident blacksmith to sell sturdy weapons and repair those broken during the hunt, and a tanner too to buy tusks and pelts from boars and cougars, and the skins and hides from orcs and trolls.

When next the polls open think Berendir for your Mayor of Lotuvira, the dwarf who fought for your freedom in the wars of Finaru, the dwarf who has served as an ambassador between the elves and dwarves for a span of years greater than a man?s life, and who has selflessly served as the Head Beard of the most prominent and prestigious of trading clans throughout the lands of Finaru and beyond.

Afraid to vote a dwarf into a high political office in Lotuvira? Would you rather place a white wig that has never bloodied his hands or lifted a pick-axe to delve into the deep and dark places of the earth? Don?t let your prejudices cloud your better judgment, let us set a new precedence across the land of Finaru and in its capital city. Let us elect a dwarf who can hold his ale and lift his axe with pride.

Vote Berendir for your next Mayor of Lotuvira. The dwarf who will fight for you.

This site uses Akismet to reduce spam. Learn how your comment data is processed.